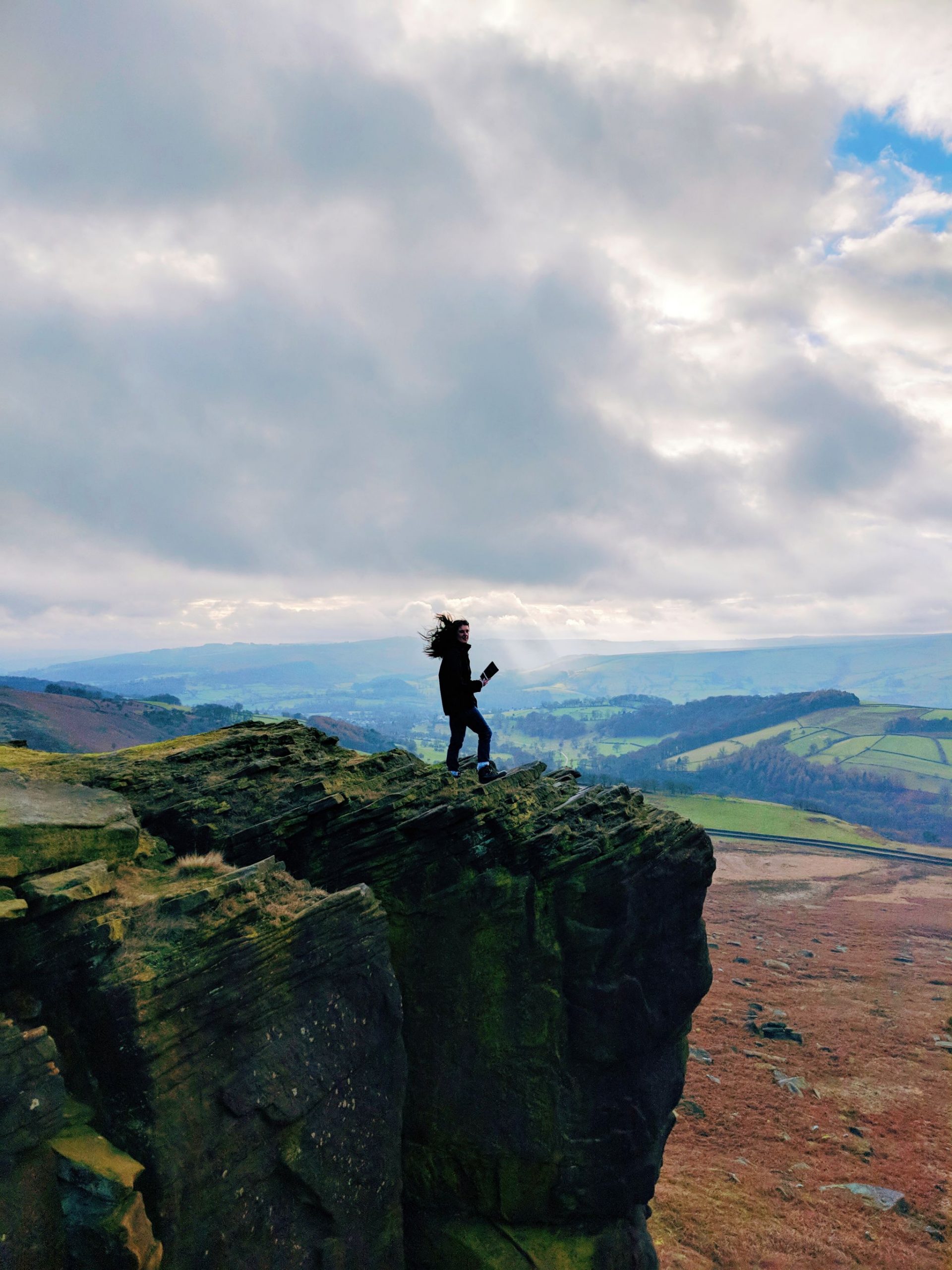 One of our new year’s resolutions is to take up hiking again so walking the Jane Eyre Trail was a perfect way to combine books and the great outdoors. This 5.5 mile (8km) route created by Peak Experience follows the footsteps of Charlotte Bronte who was inspired to write her classic novel after visiting the village of Hathersage, Derbyshire in the summer of 1845. The walk weaves past many of the main settings in Jane Eyre, bringing this famous gothic novel to life.

Having completed stretches of this trek before, we were a bit concerned whether 6 year-old Little M would manage the distance, but she did us proud despite the uphill climbs.

The walk starts at The George Hotel in Hathersage, which was run by a landlord called Morton in Bronte’s time.  She used his name for the fictional village setting in Jane Eyre.  Hathersage is still a popular spot today with several cafes, shops and an outdoor heated swimming pool – well worth an explore in itself.  On this occasion, we wanted to keep on track though so headed up the main street and turned on Baulk Lane which took us straight into the countryside.  This is the easiest stretch of the walk.  It’s relatively flat, well-marked and if you go at a busy time there’ll probably be loads of people ahead of you.  Also, if you get lost, just head for the ridge in the distance (see the first photo).

Keep an eye out for the chimneys of Brookfield Hall which became Vale Hall in Jane Eyre.

“I found it a large, handsome residence, showing abundant evidences of wealth in the proprietor.”

Rosamond Oliver, the daughter of the owner funds the school that Jane Eyre (under the false name of Elliott) teaches at. Today security is high at the hall (presumably to keep all the bibliophiles away) so you can only catch a glimpse of the house.

Once we passed Brookfield Hall the crowds thinned and we began the short climb to North Lees Hall. This is thought to be the model for the most famous of settings in Jane Eyre, Mr Rochester’s Thornfield Hall.  The views start to improve here too so if you visit, make sure you take a few moments to look back down the track towards Hathersage.

The exact inspiration for Thornfield Hall has been debated over the years, but when you read Jane Eyre’s description, you can clearly see the similarities.

“It was three storeys high, of proportions not vast, though considerable: a gentleman’s manor-house, not a nobleman’s seat: battlements round the top gave it a picturesque look. Its grey front stood out well from the background of a rookery, whose cawing tenants were now on the wing: they flew over the lawn and grounds to alight in a great meadow, from which these were separated by a sunk fence, and where an array of mighty old thorn trees, strong, knotty, and broad as oaks, at once explained the etymology of the mansion’s designation.”

The history of North Lees Hall also connects. It was built by Robert Eyre in the early 1590s and added to in 1750 after a fire.  There is even a local legend that the troubled first mistress of the hall, Agnes Ashurst, was confined in a padded room here.

Today the property is owned by the Peak District National Park Authority as a let, but I’m not sure if anyone lives there at the moment.  It seemed to be empty although we didn’t want to pry too much.  A note here to mention that this house wasn’t used in the film versions.  The directors chose Haddon Hall instead – an altogether softer option.

Stage 3: Up to Stanage Edge

The car park clock was ticking so after soaking up the drama, we set off again.  The terrain changes after this – passing through fields, pine woodland and across a road to reach the base of Stanage Edge, a gritstone ridge that runs for 3.5 miles.  We decided not to take the detour that leads to the ruins of a British-Romano settlement, but I like the idea that we still have something to see if we return. Conveniently, there are public toilets and a car park at this point on the Jane Eyre Trail because despite the rural location, this is a tourist hot spot.  Walkers, rock climbers and cyclists flock here to enjoy the epic scenery.  Watch out for the latter – bikes fly down the paths with little warning.

The climb to the ridge is easier than it looks although if you have kids they might want to scramble on the huge boulders at the foot or explore Robin Hood’s Cave.  It was said that the outlaw came from Loxley, a nearby valley.  In good weather, this place is one giant adventure playground. The drama continues as you ascend – revealing some of the best views in the Peak District – a sweeping jigsaw of bracken, grassland and stone walls.  This passage in Jane Eyre captures the brooding atmosphere:

“I struck straight into the heath; I held on to a hollow I saw deeply furrowing the brown moorside; I waded knee-deep in its dark growth; I turned with its turnings, and finding a moss-blackened granite crag in a hidden angle, I sat down under it. High banks of moor were about me; the crag protected my head: the sky was over that.”

The epic moorland scene in Pride and Prejudice was also filmed here (yes I had my Keira Knightley moment!).

Stage 4: The Return to Hathersage via Moorseats (Moor House)

We took half an hour out to refuel and headed for the path that would lead us back to Hathersage.  This entailed a 1km walk across the edge followed by a right turn downhill towards a distant car park (you’ll see a line of vehicles along the road).  Navigation became tricky here but the guide was really helpful.  It took us across yet more moorland to Moorseats, the house that acted as the blueprint for Moor House, home of the St.John siblings in Jane Eyre.  I didn’t take many photos here as the property is obviously occupied, but Charlotte Bronte’s words conjure up it’s beautifully sheltered position perfectly:

“They loved their sequestered home. I, too, in the grey, small, antique structure,with its low roof, its latticed casements, its mouldering walls, its avenue of aged firs–all grown aslant under the stress of mountain winds; its garden, dark with yew and holly–and where no flowers but of the hardiest species would bloom–found a charm both potent and permanent. They clung to the purple moors behind and around their dwelling–to the hollow vale into which the pebbly bridle-path leading from their gate descended, and which wound between fern-banks first, and then amongst a few of the wildest little pasture- fields that ever bordered a wilderness of heath, or gave sustenance to a flock of grey moorland sheep, with their little mossy-faced lambs:- they clung to this scene, I say, with a perfect enthusiasm of attachment.”

Another feature which intrigued me was the freestanding stone gateway in the adjacent woods.  Presumably this was part of an outbuilding at some point.

Just a little way further and we saw the earth wall of a Norman fort to our left before reaching the church of St Michael’s and All Angels.  The church is a thousand years old and occupies a prominent position above the village. It’s most well known for the grave of Little John, Robin Hood’s friend and lieutenant, which is now tended by the Ancient Order of Foresters.  Legend tells that Robin Hood’s bow used to hang in the church, but sadly it’s now long gone.

From here, it’s only a short walk back to the village. In all, it took us around 3 and a half hours to do the complete circuit with a 30 minute break for lunch, but it felt as if we’d been a on a real quest. This route offers so much – scenery, history, legend – and it’s short enough for novice walkers and families too.

Little M gave this a total thumbs up, particularly for the bouldering aspect and the gargoyles on the church.  I’d recommend hiking the full Jane Eyre Trail to get a real sense of the area, but if you only want to see the highlights, you could park below Stanage Edge.  You can find more details here.

A Guide to Bookshops in the Peak District