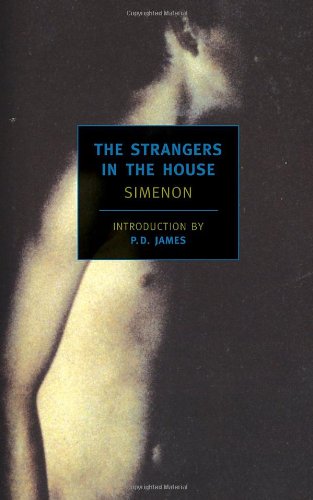 Dirty, drunk, unloved, and unloving, Hector Loursat has been a bitter recluse for eighteen long years—ever since his wife abandoned him and their newborn child to run off with another man. Once a successful lawyer, Loursat now guzzles burgundy and buries himself in books, taking little notice of his teenage daughter or the odd things going on in his vast and ever-more-dilapidated mansion. But one night the sound of a gunshot penetrates the padded walls of Loursat’s study, and he is forced to investigate. What he stumbles on is a murder.

Soon Loursat discovers that his daughter and her friends have been leading a dangerous secret life. He finds himself strangely drawn to this group of young people, and when one of them is accused of the murder, he astonishes the world by taking up the young man’s defense.

The Strangers in the House by George Simenon is the first novel I’ve read by the Belgian author who’s best known for creating the detective Maigret. I didn’t buy this book myself. This was chosen by Al who’s enjoyed a couple of Simenon’s novels before and even though this isn’t a Maigret novel, I thought I’d give it a try.

This isn’t my usual type of book and I’ll freely admit that I started this because I thought it would be a quick read. In fact, this took me two weeks to complete. Although, the themes were handled well, the plot didn’t grip which is a shame because the premise had so much potential. Also, for those considering this, there are trigger warnings. Simenon mentions violence towards women and there’s a racist element at the end which I didn’t expect. Even though this was published in 1940, if these aspects had become apparent earlier in the book, I would have questionned whether to continue reading.

Despite the flaws, Simenon’s depiction of the main character was a highlight of The Strangers in the House. When he’s forced out of his drunken cocoon, Loursat begins to self-reflect. He examines his past and his place in the community – eventually embracing his introversion, cutting his booze intake and rebuilding his relationship with his daughter. Instead of joining the fold as you’d expect, he ultimately decides to mostly opt out of society, having witnessed the class divisions in his small town. You get the feeling that he goes back to his comfort blanket apart from the odd drink at a bistro.

“A warm stove, red wine, dark red wine, and books, all the books on earth. That was Loursat’s world.”

I liked this twist on the traditional happy ending. The entire novel has a melancholic atmosphere with events set against a backdrop of grey, rainy weather. The characters are all imperfect – trapped by circumstance. Throughout the book, Simenon exposes the inequality of power in the town. The teenagers and their families embody the different strata – each one having varying protections in the case depending on their status. The power play within the ‘gang’ of teenagers forms a central part of the mystery. What will each do to attain their desires?

By representing the underdog, Loursat comes to understand the system – and his own misery – in clear detail. But this is where it fell down for me too. It was as if the themes has been prioritised over character and plot. There were too many players in too few pages, which made the flow very choppy. The final reveal was also disappointing.

This hasn’t put me off reading more books by Simenon though. He published nearly 500 novels in his lifetime, 75 of these involve Jules Maigret so I would like to try one of these next. Do you have any Georges Simenon book recommendations?

To get a sense of the author’s style, I’ve shared a few Georges Simenon quotes below.

“I would like to carve my novel in a piece of wood. My characters—I would like to have them heavier, more three-dimensional … My characters have a profession, have characteristics; you know their age, their family situation, and everything. But I try to make each one of those characters heavy, like a statue, and to be the brother of everybody in the world.”

“He distrusted ideas, as they were always too rigid to reflect reality, which, as he knew from experience, was very fluid.” ― Maigret and the Lazy Burglar

“Human tragedies are always simple when we reconsider them in retrospect.” ― Maigret and the Old People

It seems to be quite tricky to get hold of this title, but you can buy used copies here. Our 1967 Penguin edition was entitled Stranger in the House after the film adaptation and we bought it from Ironbridge Books. I’ve posted the trailer below (the movie doesnt look anything like the book!)