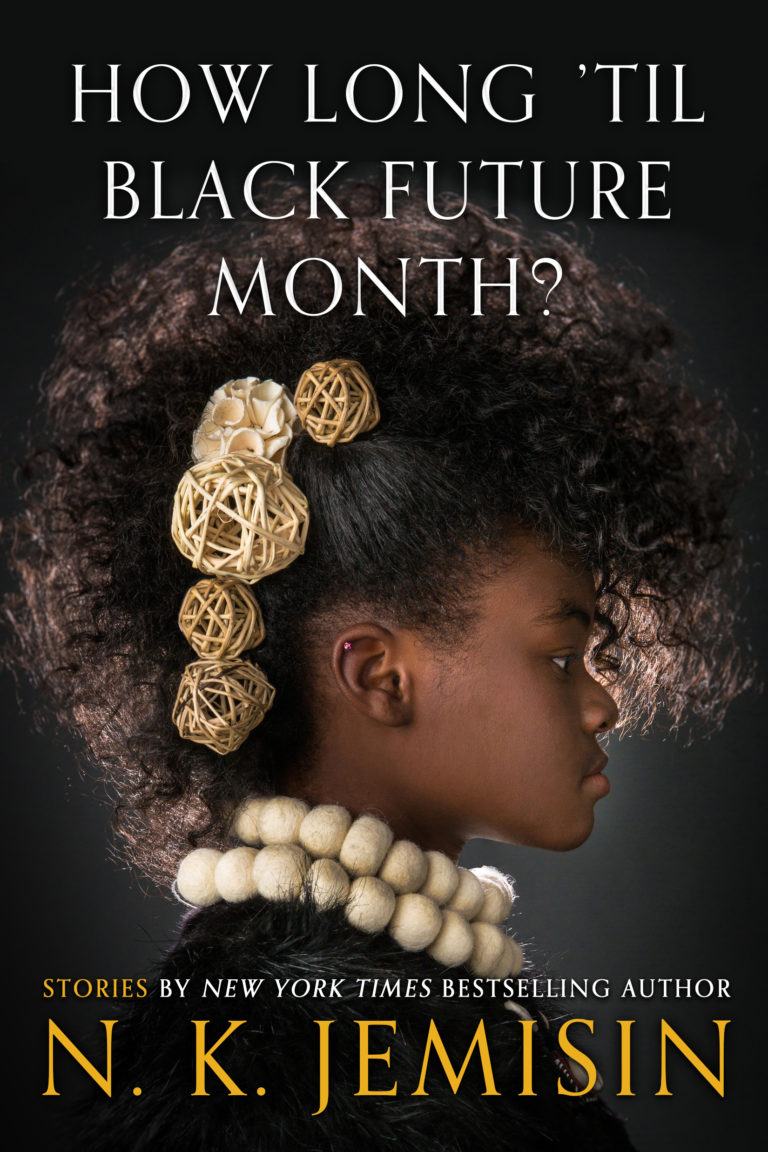 How Long ’til Black Future Month? written by three times Hugo Award winner N.K. Jemisin, has been one of my most-awaited books of 2019.  When I read her Broken Earth trilogy in 2017, it immediately leapt into my top 10 favourite book series – for its story, characters and trope turning.  Jemisin doesn’t retell, she invents so I jumped into this speculative short story collection with eyes wide open.

What I found was far more fascinating and rawer than I’d imagined.  The collection is the result of fifteen years’ worth of writing.  It includes a staggering range of material from harder SF in The Evaluators to the twists on more ‘traditional’ folkloric themes in Red Dirt Witch.  Some stories are upbeat, some are terrifying, but each one slants from the expected.  The blurb gives some idea of the scope:

In these stories, Jemisin sharply examines modern society, infusing magic into the mundane, and drawing deft parallels in the fantasy realms of her imagination. Dragons and hateful spirits haunt the flooded city of New Orleans in the aftermath of Hurricane Katrina. In a parallel universe, a utopian society watches our world, trying to learn from our mistakes. A black mother in the Jim Crow south must figure out how to save her daughter from a fey offering impossible promises. And in the Hugo award-nominated short story “The City Born Great,” a young street kid fights to give birth to an old metropolis’s soul.

I found something vital in all of the stories, but here are the ones that particularly sang to me:

Sinners, Saints, Dragons, and Haints, in the City Beneath the Still Waters

This mythical tale of one man’s survival in the aftermath of Hurricane Katrina is the stuff of progressive legend. Aided by a lizard, poverty-stricken Tookie tries to protect his city from encroaching doom and evade the unseen malevolent creatures that stir in the New Orleans floodwaters. I’ve never read anything quite like this before, but the odd pieces formed a strangely natural and powerful whole.

I buddy-read the book with my friend Ashley at The Archaeoreader and we both agreed that this was one of the highlights of the collection. Think Sorceror’s Apprentice then add in a platter of delicious food, a handful of bizarre ingredients and one middle-aged female cook to get a taste of this magical short.

Zinhle lives in a kind of human zoo run by AI/human hybrids. She’s the brightest in her class, yet unsure of her future in a society that values conformity.  When one of the AI rulers visits her, she’s forced to re-evaluate everything she knows.  This is one for outsiders everywhere.

Nahautu enjoys a simple, sustainable life on a ravaged Earth, but when the weather changes her existence is turned upside down by well-meaning scientists.  A warning against messing with nature and probably the most depressing of all the stories.  I can’t stop thinking about this sad, frightening fable.

On a personal level, what I found particularly striking was how closely Jemisin’s imagination syncs with my own.  I’ve explored similar themes in my writing and I also share her progressive world view.  Although the diversity in How Long ’til Black Future Month? is an important feature,  these tales are universal and focus the need to create an equal society where everyone has a voice.  In the words of N.K. Jemisin herself – ‘So come on. There’s the future over there. Let’s all go.’