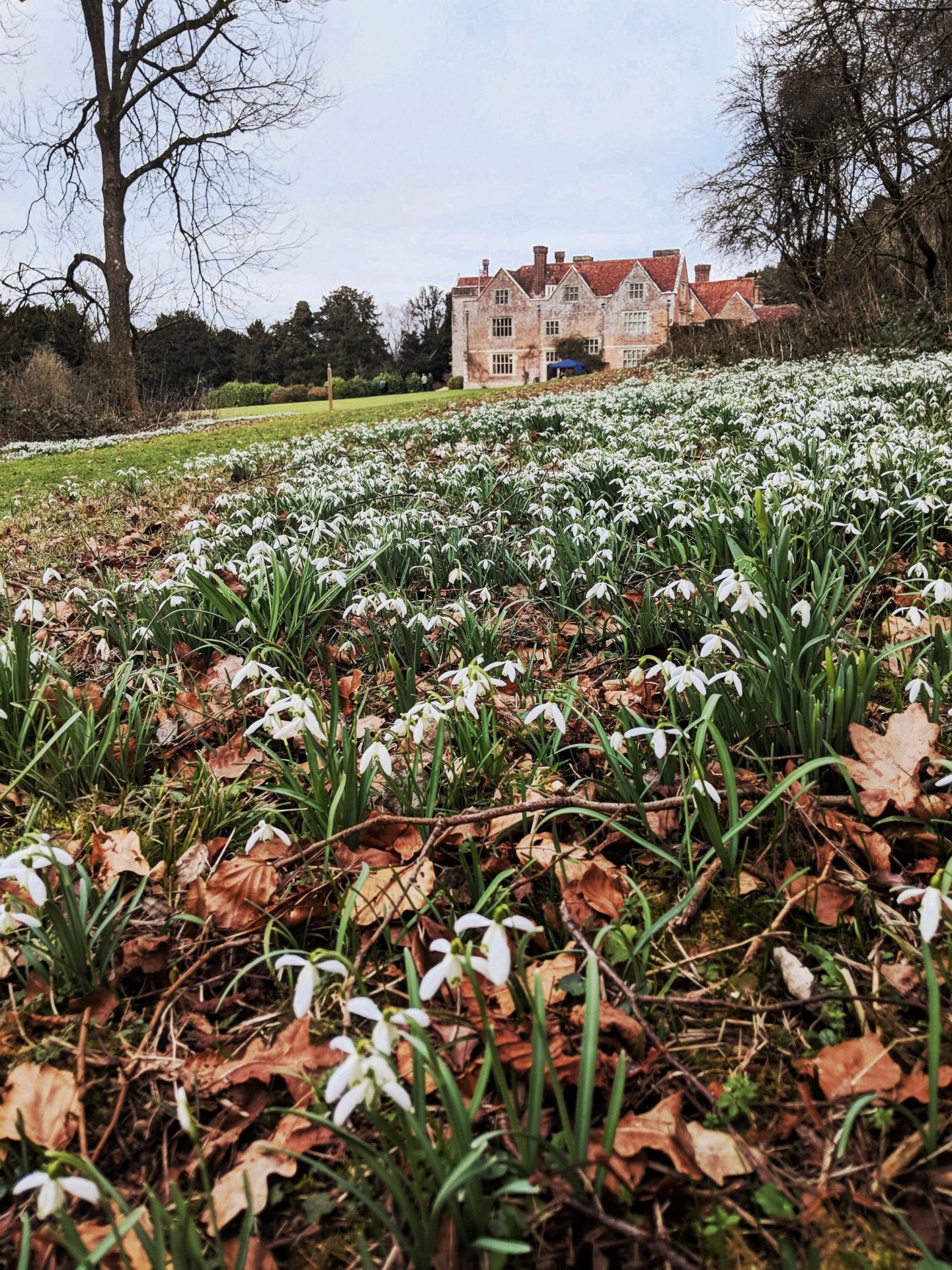 If you ever travel to Jane Austen’s House Museum in Chawton, it’s also worth making time to see Chawton House.  Referred to as the ‘Great House’ by Jane Austen, this Elizabethan manor once belonged to her brother Edward, and is now open to the public.  It’s a striking property with a beautiful garden. But more importantly for book lovers, it also houses the research library for the Centre for the Study of Early Women’s Writing, 1600–1830.  In the charity’s own words:

We foster research and understanding of early women writers, restoring them to their rightful place in the history of English literature and enabling them to speak directly to – and inspire – future generations.

I wish I’d read up more about it before we visited, but as we went before the official opening date in early March, we weren’t sure if it would be open.  Luckily for us, the NGS (National Gardening Scheme) was holding a snowdrop open day so we were able to take a peep inside.

Chawton House is roughly a 10-15 minute walk from Jane Austen’s House Museum.  Alternatively you can park on the main road at the end of the drive.  The walk up is very picturesque.  You pass the church of St.Nicholas on your right and another ancient building on the left to reach the property.  On the day we went, admissions were via a door on the right-hand side and we paid £10 per adult for access to the house and garden.

We were given a map for the garden, but there didn’t seem to be any fact sheets for kids.  I’m uncertain whether this was because it was an NGS day, or because the house doesn’t really cater for younger visitors at the moment.

The house contains many fascinating features including ‘witch marks’ on walls and a huge map of Georgian London.  There’s much about the Knight family as well, but the main interest stems from their connection with Jane Austen who used to visit Chawton House frequently.  Although there are few remnants of her stay,  it’s clear that she often borrowed books from the Knight Collection, the library belonging to her brother.  The main 2019 exhibition which can be found on the first floor focuses on Jane Austen’s reading and includes the books she had access to and the ones that influenced her writing.  If you’re planning to visit Chawton for literary reasons, then this is an essential because the House Museum only skims over this subject area.

The library can be accessed via the main entrance hallway/shop. We weren’t sure if this was open to the public or via tour only however as it didn’t seem to be clearly signposted.  The room, although relatively small, is absolutely beautiful and contains many rare works.   There are two main collections:

The diversity and amount of women’s writing was quite surprising to see as much of this has been hidden away over the years.  One of the Chawton House Library’s main aims is to make this work accessible again and I was delighted to discover that you can read many of the novels online.  There was also a display on Writing Women’s Rights: “The pen in their hands” but we ran out of time to delve into this sadly.

This contains the Knight Family private collection which dates from the 1500s. It includes many titles which were read by Jane Austen while at Chawton House. She refers to one of these, Fordyce’s Sermons in Pride and Prejudice.  You can view the catalogue here.

Jane Austen fans will recognise the English Landscape style gardens from her novels.  The lawn, the ‘wilderness’ and the ‘ha-ha’ are all features which crop up in her books.

The two terraces both bear evidence of the influence of Sir Edwin Lutyens who was a friend of the family.  There’s also a lovely Walled Garden which was built by Edward Austen, and mentioned in Jane Austen’s letters.  When we visited, the snowdrops were out in force and the walks were very busy.  It’s definitely a garden for all seasons.

We left Chawton House feeling as if we’d found another piece of the Jane Austen jigsaw.  Although there was a sense that the charity is still building it’s identity, it has lots to offer both serious and casual visitors.  However, I wouldn’t say that this is particularly set up for families quite yet.  We noticed a tiny dress-up area and the guides were friendly, but there didn’t seem to be any quizzes or trails to follow.  If you’re planning to go with kids, it’s probably better to pick one of the days when they hold special children’s events.  Saying that, we absolutely loved our visit and would jump at the chance to return.